A Trailblazing Lesbian Artist Gets Her Due, Hyperallergic

Hammond’s work can appear bewildering at first, expansive in its diametrical explorations, and sprawlingin its material juxtapositions. The exhibition, which takes place over four galleries, encompassing paintings, drawings, textiles, sculptures, and installations from the 1970s to the present day, eschews chronology – an astute choice by the curator, Amy Smith-Stewart. Polemical considerations and

Hammond was born in a lower middle-class suburb of Chicago in 1944 and studied art in Decatur, Illinois, before moving to Minneapolis with her husband, Stephen Clover, an artist who came out as gay within ayear of their marriage. Hammond’s early work was expressive and figurative, but she later adopted thehard-edged abstraction of Minimalism which, along with Pop and Conceptual Art, was in vogue in the 60s. Her male contemporaries, most notably Frank Stella and Carl Andre (whose influences can be felt inHammond’s work), rejected the expressive drives that had characterized Abstract Expressionism’s “action painting” the decade prior, electing instead an industrial vocabulary of materials and processes that erased sentient corollaries of gesture and touch.

In the August following the Stonewall Riots in June ’69, Hammond and Clover moved to New York. Thecity was a hotbed of political activity. The Civil Rights movement, coupled with the women’s movement,antiwar protests, and the start of the Gay Liberation movement put New York on the cusp of a social and cultural revolution. Second-wave feminism was just around the corner. The couple separated, but Hammond was pregnant. She later gave birth to a daughter, Tanya.

In the first gallery, I am drawn to “Little Suture” (2001–2), an abstract painting with assemblage elements. It is bifurcated into oppositional color schemes — cadmium reds and greens, at once somber and saturated — with a found rectangular corrugated metal sheet running down its center.

The painting is uncannily corporeal, a coincidence of duality and oneness, denoting both flesh and spirit. The impasto surface, with its gentle, throbbing monochromes, evoke the pulsations of the body — the heartbeat, blood cells, and veins — while the undulating, rusted sheet of metal, resembling a rib cage and spinal cord, is marked with delicate streaks of red, redolent of both blood and an electrical charge.

For a few years in the early ‘70s, Hammond was part of a feminist consciousness raising group in NewYork. The group, which included the painter Louise Fishman, came to understand that women as a class were oppressed, and their work was not taken seriously. A wall text in the exhibition quotes Hammond:“For me the painting skin, that edge where art and life meet, always relates to the body as site.”

By locating the body as a site, Hammond marshals the female body out of a state of passivity into the world of energy, and action. The conflation of consciousness and activism — her singular contribution to the expanded fields of post-minimalism and queer art — is at the heart of Hammond’s complexexperiments with abstraction.

In the corridor leading from the first gallery to the second, on the museum’s ground floor, there is a seriesof smaller works completed between 1993 and 2005, done at various stages in the artist’s life. “BloodJournals (Giorno I–X)” (1994) is a riveting series of works on paper the artist made while at theRockefeller Foundation Bellagio Center in Northern Italy. While there, she used her menstrual blood, along with watercolor, charcoal, ink, and stickers, to scrawl cryptic messages on paper. Menstrual blood, considered a taboo bodily fluid, had already been used by other feminist artists, including Carolee Schneemann and Judy Chicago, to situate the female body as a place of political agency.

One of the works read: “touch me and let me touch you/for the personal is political/language waivers with desire/it is skin/with which I caress the/other.” Barely legible, the lesbian voice, a specter of unspokendesires, is inscribed with blood as a palimpsest on paper, a record of its being. The fourth wall has comedown, the actor in the play has revealed herself: it’s the most unmasked work in the show.

A sense of peril lurks just beneath the script, a sense that articulating these thoughts, feelings, gestureshave the potential to provoke violence, from within and without. The script’s intimation of same-sex intimacy as the harbinger of sexual politics transforms this work into a conceptual and moral fulcrum, upon which everything else that comes later delicately hinges.

Touch, as a radical gesture, continues to resonate in Hammond’s “wrapped sculptures” which are located sporadically throughout the exhibition. “Kong” (1981), the largest of these, is an aggrandized hand which, according to the wall text, belongs to “a spatial invader or interloper.” Or, perhaps alternately, to a lesbian who, having lived in the closet for far too long, pries her way out to claim her power. If “Kong” represents a corpus of power, then an unfurling hand could be a convenient metaphor for “coming out” and suchrelated idiomatic expressions as “taking power back in one’s hands.”

Made of foam rubber, gesso, glitter, wax and charcoal powder, these wrapped wooden armatures, which have a fantastical quality to them, were conjured up by a line in Monique Wittig’s 1973 novel Le Corps Lesbien (The Lesbian Body), in which she writes, “Cloth covered with latex suggests muscle and tissue.” These “wrapped sculptures” convey a muscular grace, as if Minimalism itself got a camp makeover par elegance.

Hammond, who came out as a lesbian in 1973, was on the forefront of the feminist and lesbian artmovement in New York in the early ‘70s. She was a founding member of A.I.R., the first women’scooperative gallery in the city, and of the journal Heresies: A Feminist Publication of Art and Politics. She organized A Lesbian Art Show, the first of its kind, at 112 Greene Street Workshop in Soho in 1978, and her book, Lesbian Art in America (2000), is still the definitive tome on the subject. “It’s not only about making our work,” as Hammond writes in an Artsy post commemorating the 50th anniversary of Stonewall, “we also have to document and preserve it and insist on a place in history or it will be erased.”

Feminist artists of the era, Hammond included, celebrated handicrafts from both the domestic space and non-Western cultures as a cultural antithesis to Western patriarchal art histories that positioned white men at the center of the narrative. Through consciousness-raising activities and particularly her practice of t’ai chi ch’uan and Aikido, martial arts originating in China and Japan, respectively, Hammond learned to claim space through mindful and precise bodily movements. In the second gallery, Hammond harnesses this spiritual knowledge and applies it to female labor with “Floorpiece II-VI” (1973), a group of brightlycolored mandala-like painted floor sculptures, braided from the inside out, that resemble household rugs.

Made the same year the artist came out, these works also reflect her personal gesture of cutting off herbraided ponytail. The floor pieces’ “braids,” made of commercial knit fabric waste collected from dumpsters, became Hammond’s idiom for a lesbian aesthetic. Hammond believed that the braids, whenwoven together and placed horizontally, reflect states of similitude and intimacy, making it a ripe lesbian metaphor for same-sex communal empathy and love; and one born out of a female consciousness.

“Presences” (1971-72), a group of six crudely made headless effigies adorned in painted and weathered rags, haunt the third gallery, on the second floor. The work, first shown at A.I.R. Gallery, has beenrestaged 46 years later (which speaks to the pitiful economy for women’s art, even when it’s this important, but that’s a different topic).

Hung by coarse rope affixed to coat hangers, this “rag tag army of women occupying space,” asHammond describes them, feels more like a public execution site: I imagine a lynching scene of Salemwitches. The use of coat hangers is also a particularly chilling reminder of the country’s all-too-virulent abortion wars, in which the coat hanger has become a national symbol for dissent against regulatingwomen’s bodies.

In 1984, Hammond took a trip out to New Mexico, and like her forbears, Georgia O’Keefe and AgnesMartin, she never returned to city life. She settled out in Galisteo, commuting to teach in Tucson, Arizona, until she retired in 2006. The ruggedness of the land — its distinct cultural history and rural aesthetic — is evident in the later work on display in the last gallery, accentuating it with a sense of place, and oddly enough, a new sense of belonging.

To be a lesbian, writes Martha Gever, “means engaging in a complex, often treacherous, system of cultural identities, representations and institutions, and a history of sexual regulation” (quoted in Hammond’s Introduction to Lesbian Art in America). Throughout her work, Hammond has generouslyextended the definition of the word “lesbian” to include all women on the social fringes, who have beendowntrodden, forgotten, and marginalized.

“Chicken Lady” (1989), a large work made of corrugated roofing, a colorful embroidered quilt left behind by her close friend, the artist Ann Wilson, and a painted text from a letter she received from Marian Doherty, an A.I.R. intern (also reproduced in the gallery) is among the works that reinforce this claim, referring to a notational character in Hammond’s universe of misfits on the peripheries of gender andsocial class, a fictional woman who lived along a riverside with her chickens.

“Chicken Lady,” along with “Inappropriate Longings” (1992), a large triptych hanging diagonally acrossfrom it, a metal bucket of leaves set down in front, are resolutely situated within a locale, rather than a state of consciousness. They reveal genius loci, a spirit of a place. Did Hammond finally locate a sense of belonging in the vast arid plains of the Southwest? It would appear so.

The last set of works in Material Witness are Hammond’s most recent paintings. Constructed in viscouspaint with embedded grommets, straps, pushpins, laces, ropes, folds, flaps, seams, cloth strips, andpatches of coarse burlap, these austere and monumental “near monochromes” have the presence ofhermetically sealed bodies that are synchronously wounded and healing. 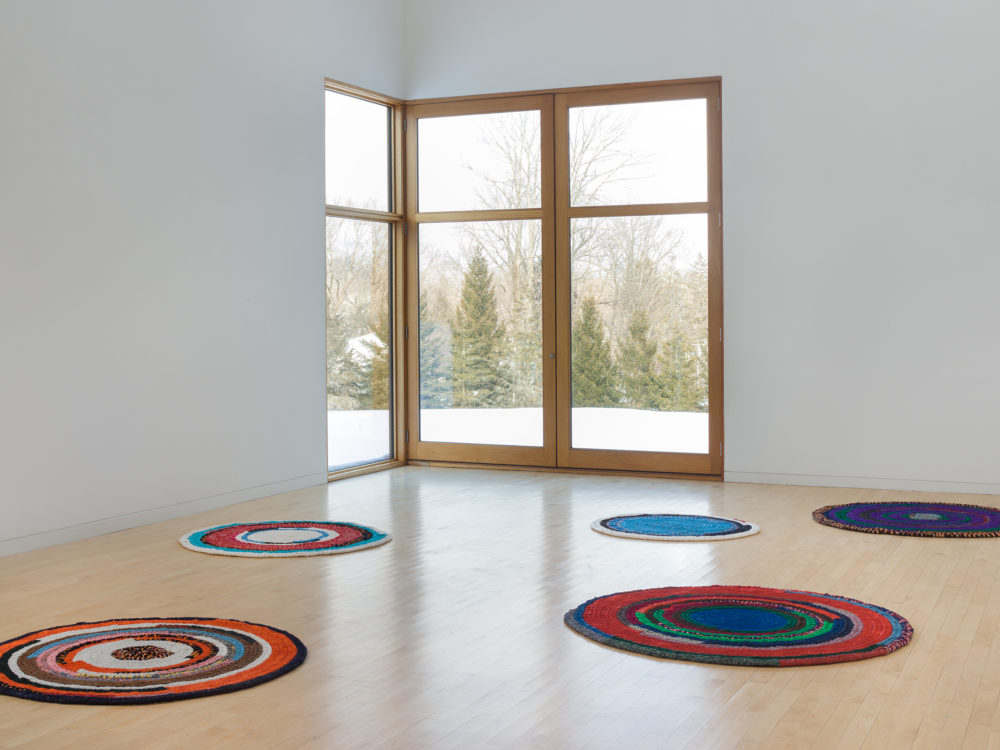 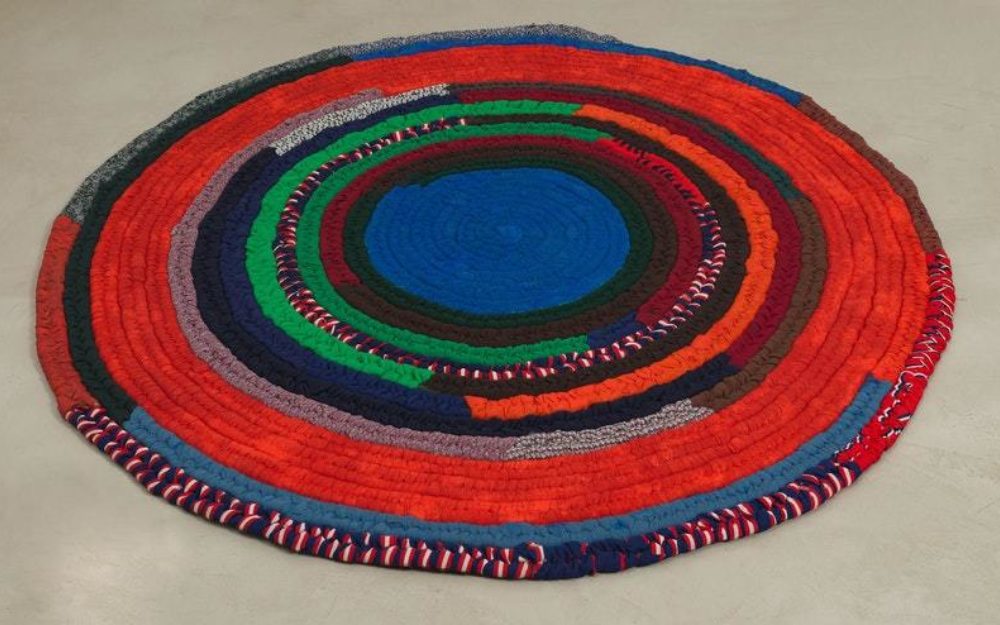 Harmony Hammond proves that abstract art can be politically charged and bursting with content. 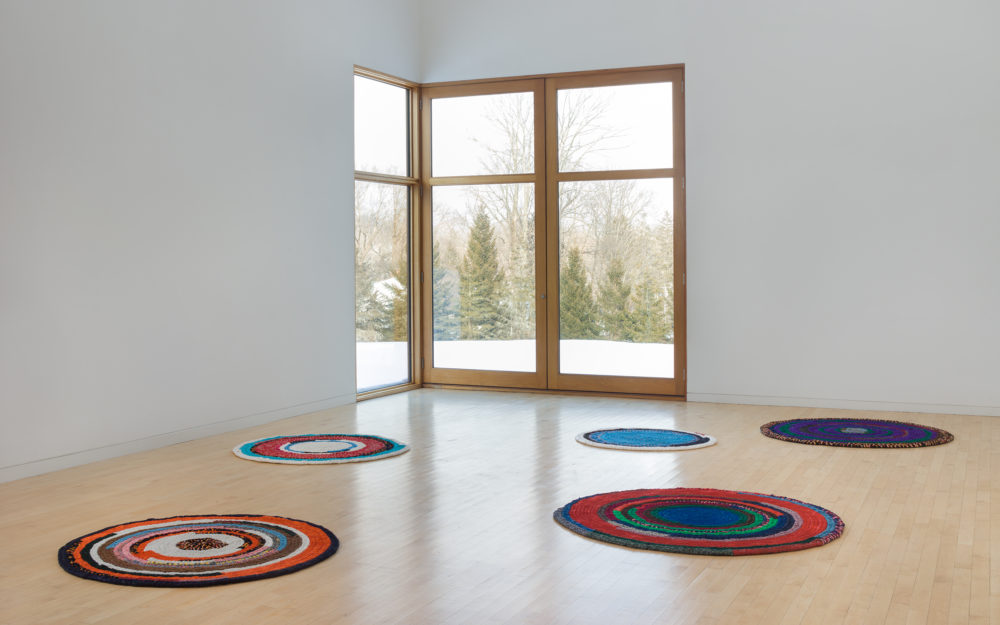