For Karla Knight, Paranormal is Normal, The New York Times

For Karla Knight, Paranormal Is Normal

An interview with the mystically inclined artist, who shares the interests of Hilma af Klint and Agnes Pelton.

RIDGEFIELD, Conn. — Artists attuned to the supernatural, paranormal and occult have sometimes been dismissed as eccentric visionaries, but the art world is increasingly receptive to their channelings. An immensely popular retrospective of the Swedish mystic Hilma af Klint, at the Guggenheim in New York three years ago, connected early Modernist abstraction to Spiritualist séances; last year, the Whitney celebrated the Transcendental symbolism of Agnes Pelton, who painted luminous portals and apparitions within desert landscapes.

The contemporary artist Karla Knight shares many of these artists’ interests, and some of their practices; she grew up in a family that held regular Oujia board sessions, with a father who published books about U.F.O.s. But her paintings and drawings reveal a more general fascination with things unknown or inexplicable, one she shares with early-20th-century Surrealist artists and the postwar Abstract Expressionists who explored Jungian psychology. Knight’s first museum survey, “Karla Knight: Navigator” at the Aldrich Contemporary Art Museum in Ridgefield, Conn., organized by Amy Smith-Stewart, presents us with indecipherable languages of the artist’s invention, weathered old grain sacks and ledger books bearing images of futuristic spacecraft, and mysterious orbs that hover within mazelike geometric abstractions.

In a recent phone call, Knight spoke about some of her worldly and otherworldly inspirations. Here are edited excerpts from that conversation.

You come from a family with strong interests in the supernatural and interplanetary. Your grandfather was a transcendentalist who wrote about his experiences of communicating with the deceased and held séances for the family, and your father was also an author who published books on U.F.O.s. How did they influence you?

Yes, I come from a family of authors on that side. My father wrote books, many of them for children, on science and history and astronomy as well as poltergeists and ghosts and U.F.O.s. He had books about psychic phenomena and mediums and the history of U.F.O.s in his library, as well as classical texts. On Easter or Thanksgiving, we would have séances in which we would use the Ouija board. Paranormal was normal for us.

You’re also part of a family, so to speak, of artists who were known as mediums or mystics — for instance, the Swedish pioneer of early-20th-century abstraction Hilma af Klint. When did you first encounter her work, and how did it affect you?

The show was called “The Spiritual in Art,” in 1987 in Chicago, and it just blew my mind. I very much relate to af Klint. I love that she didn’t want her work seen for years — she felt ahead of her time and she was aware of the time it would take for people to even be able to comprehend her work. Her art strikes a very deep chord with me, and I think it does in most people that have seen it. Obviously there’s a hunger out there for that kind of mystical work. People want something more than what they can see or understand.

Although you have affinities with these artist-mystics, it seems like your working process is a different one. When you go into the studio, you’re not channeling anything, right?

I don’t call myself a healer or medium, although I do think some of what I do is channeled — I think any good artist or writer or musician is a channeler. With the imaginary language I invented, for instance, I don’t know that it means anything. It may be complete gibberish. I do feel like I’m a bridge between worlds — that has always felt like my earthly job. But what that actually means, and what the other world is, I would never presume to say.

Can you tell me more about how you invented that imaginary language?

It started to develop about 20 years ago, when my son was learning to read and write. When you watch kids enter the world of written languages, it’s fascinating. They start making their letters and then mess them up and make them their own. Watching my son do this, I thought, why can’t I make up my own language? I put some of my son’s writing in my journal, and then I started to make up some letters around it. I don’t hear the language in my head yet, but I have dreamed in it. It’s become a full-fledged language to me — I’ll just sit there at night and write in it like it’s English.

In some of your works there are legible English word lists, though — playful, slangy pairs of words, such as “Orb Brain” and “Muddle Head.” Where do those come from?

Freelance book indexing was my day job for years. Having indexed hundreds of books, I have a tendency to organize things in lists and columns. The words come from different places. I’ve found some in science books, like “Simple Sponge” or “Primal Slime.” If there’s a phrase I like, I’ll throw it in there. It’s a way of having more information in the work, in a different way than with the imaginary language.

Your newest works are inspired by another way of picturing and organizing information: the “Winter Counts” made by Indigenous people of the American Plains. In these drawings on hide, paper or muslin, important tribal events are recorded with small pictographs. What drew you to these objects?

Yes, the tapestries that you see in “Navigator” are very influenced by the Lakota Winter Counts, which I saw at the Metropolitan Museum of Art in the show “The Plains Indians: Artists of Earth and Sky.” The Native Americans used them as calendars and historical documents. They would make one character per year, representing a war or a death or a celestial event or a harvest, in a kind of spiral pattern. I just love the way the information was compiled. I guess it relates to indexing and the way I like to order things.

You have recently joined the roster of Andrew Edlin gallery, which is focused on artists who are self-taught or described as “outsider” for other reasons. You have more of a traditional art education. How do you feel about this new context for your art?

I went to art school, but I think of myself as an educated outsider. I don’t really think about current trends in the art world, and I have always followed my own stubborn interests. “Outsider” can be a difficult term, but Andrew certainly is welcoming of work that is not easily explained or understood. He shows artists who really didn’t care what the world thought and followed their vision.

Who are some artists you really admire?

In terms of outsider artists, Melvin Way is probably my favorite because he too has his own secret language and he’s not explaining it to anybody. Ionel Talpazan is another favorite — he had a U.F.O. experience as a child, and he spent the rest of his life making art about it. And James Hampton’s “Throne of the Third Heaven,” this installation he made for years in his garage without anyone knowing, is just amazing. But my favorite artist is Goya, because he scares me more than anybody. And I love Alfred Jensen’s diagrams, and anything by Jasper Johns. My interests are eclectic, and not based on current events or politics or trends. They’re much more otherworldly than that. 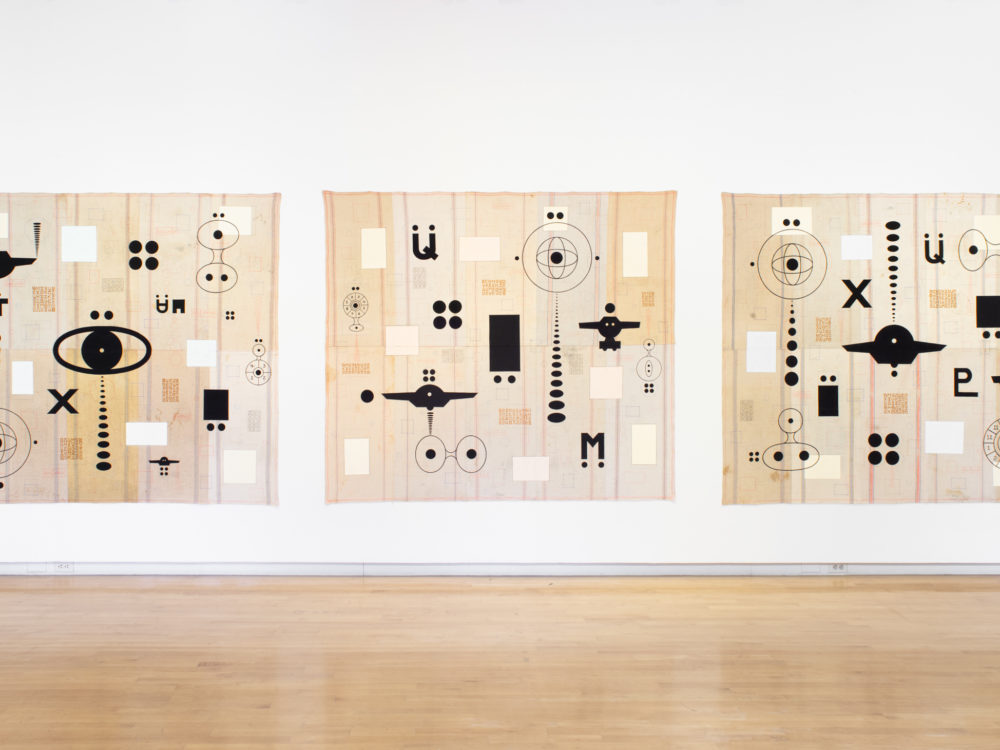