In Frank Stella’s Constellation of Stars, a Perpetual Evolution, The New York Times

RIDGEFIELD, Conn. — For Carl Jung, a name was not just a name. In his 1960 book “Synchronicity,” the Swiss psychiatrist proposed that what you’re called may have a determining effect on your whole life, structuring your behaviors and your outlook in ways that resemble a secret compulsion. Someone called Herr Gross (“Mr. Tall,” in German) probably “suffers from delusions of grandeur,” Jung wrote, while Herr Kleiner (“Mr. Little Guy”) “has an inferiority complex.” The good doctor did not spare himself from this diagnosis; why is Herr Doktor Jung so interested in youth, while Freud (“Dr. Joy”) espouses the pleasure principle?

A pretty silly theory. But then consider “Frank Stella’s Stars, a Survey,” a quiet but cheering exhibition at the Aldrich Contemporary Art Museum here. Badly misclassified as a “minimalist” since the debut of his striped black paintings in 1959, Stella has spent decades reformatting the shapes and materials of abstract painting — to the point that his bulging reliefs and metal casts became something more sculptural than painterly. How to reconcile the gestures of art in two dimensions with the volumes of three? He found one answer, late in his career, in his own last name: the star (stella, in Italian), a motif he first explored nearly 60 years ago, then abandoned, and has since returned to with verve.

This show includes 25 works: wall-mounted or free-standing, indoors or outdoors, minimal or lush, jet-black or discordantly colored, as small as a softball or as high as a giraffe. The Aldrich has installed three stainless-steel stars in view of Ridgefield’s Main Street, while in the garden out back are two awesome stars, with struts made of teak or cast in aluminum. They’re settled into the grass like colossal jacks.

Almost everything here dates from the last decade. The star is a marker of 21st-century Stella, even if it has a small place in his early career. Still, whatever a clinical psychiatrist (or a scholar of onomastics) may make of this late constellation of stelle, to an art critic’s eye “Frank Stella’s Stars” is a testimony to an artist, now 84, in perpetual evolution. Its focus on the star motif ends up reaffirming the restlessness of this painter’s progress and his underappreciated engagement with new technologies of design, fabrication and display.

Stella broached the star as a compositional element with his shaped canvases of the 1960s. He had burst into prominence at 23, when the Museum of Modern Art showed his poker-faced “Black Paintings,” their surfaces obliterated by stripes. The stripes’ thickness and direction followed from the canvas’s edges and the brush’s thickness, resulting in abstractions derived from painting’s most fundamental components.

Young artists today have come to accept our “post-medium” condition, but in postwar New York the fundamental qualities of painting or sculpture were sacrosanct, and a painting’s success was frequently judged by how faithful it was to the medium’s essence. A painting was a painting, and “a sculpture,” as Stella famously said, “is just a painting cut out and stood up somewhere.”

In 1960, Stella started to paint stripes on canvases stretched across custom armatures: crosses, T’s, zigzags — and stars. Here at the Aldrich is an eight-pointed canvas from 1963, whose orthogonal red-orange stripes radiate from the corners to the center. (Also on view: a drawing and two lithographs, from 1967, that reproduce an asterisk-shaped canvas whose stripes form chevrons.)

Yet the shaped canvas, even more than the flat stripes, destroyed any remaining illusion that a painting is a window on a world. In the period this show hopscotches over, Stella’s paintings became more object-like (with the curved, colorful Protractors of the late ’60s), and then began to carom off the wall (in his great Polish Village series of the ’70s, reliefs inspired by pictures of wooden synagogues and timber buildings, all but lost during World War II). Among their challenges, these paintings insisted that their positioning on a wall is not incidental; painting and wall informed one another, not unlike a sculpture on a plinth.

In the 1990s, the artist began “painting” in three dimensions with the help of computer-aided design software, the sort that architects use for rendering buildings. Stella stellated once more in these hybrid paintings/sculptures, among them the 12-foot mural “Nessus and Dejanira” (2017), with a twelve-pointed star, made of multicolored aluminum lattices, nestled in a big fiberglass drape. These later reliefs pushed the limits of new fabrication methods, such as 3-D scanning and plastic rapid prototyping. But they still feel like art with an identity crisis, possible to admire but hard to love — and his smaller reliefs, with stars and Slinkies plunked onto steel plates, come across as zany for zany’s sake.

The way forward, Stella discovered at the turn of the 2010s, was to get off the wall, and use the computer as a painterly tool to produce stand-alone stars. The stars are often monochrome, black or beige or naturally metallic, and their points can take the form of solid planes, spindly lines or wire-mesh circuits. Stars collide and interweave in an illuminating gallery of small-scale prototypes, whose stellar forms appear as 3-D printing études.

The imposing “Fat 12 Point Carbon Fiber Star,” its 21 feet amusingly stuffed into an undersized gallery here, distends the star’s twelve points like overinflated balloons. Its glossy black finish is as sleek as one of the artist’s beloved racecars, though finish and color have never really been a major part of Stella’s art; a smaller aluminum star outdoors does not disguise its soldered corners and rusting joints. Unlike Jeff Koons’s fetish objects or Anish Kapoor’s distorting solids, Stella’s stars are more rewarding as exercises in style and shape, testing out and maximizing what a given medium can do.

Not unlike the orthogonal stripes on the early shaped canvases, the stars have their forms determined from a clear geometric process. You start out with a simple solid — most frequently a dodecahedron, or a solid with twelve pentagonal faces — and then form the star’s points by extruding each edge. The resultant twelve-pointed star (called a small stellated dodecahedron) can then be printed in nylon or thermoplastic, cast in steel or aluminum, rendered at two feet or twenty. It’s rule-based but pliable. Dwarfed beneath “Jasper’s Split Star,” whose points are half solid and half wire-mesh, I felt none of the arrogance that attends so much large-scale sculpture. The star is a sympathetic, even chummy offering, from an artist still committed to thinking anew.

A last, curious matter is the names of these stars. Stella may be the most out-there titler in contemporary art; his abstract paintings take their names from Brazilian birds and Balinese anthropology, Scarlatti sonatas and Nazi marching tunes. But the stars, curiously, have been baptized with the most unpoetic titles in his oeuvre. A small sculpture of two stars affixed to a metal truss is simply called “Stars With Truss I.” A star made of orthogonal metal pipes is just “Star With Square Tubing.” That beautiful teak stellation in the grass is called “Frank’s Wooden Star.” It’s as if these late works no longer needed poetry: just his name and the other stella, conjoined by the stuff of art. 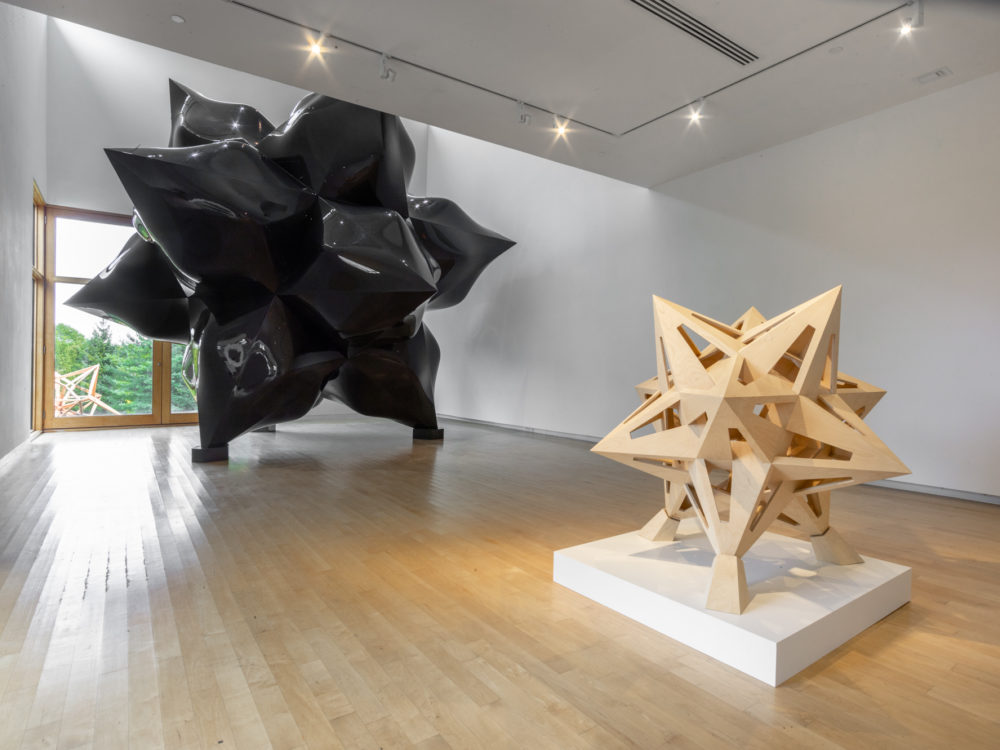 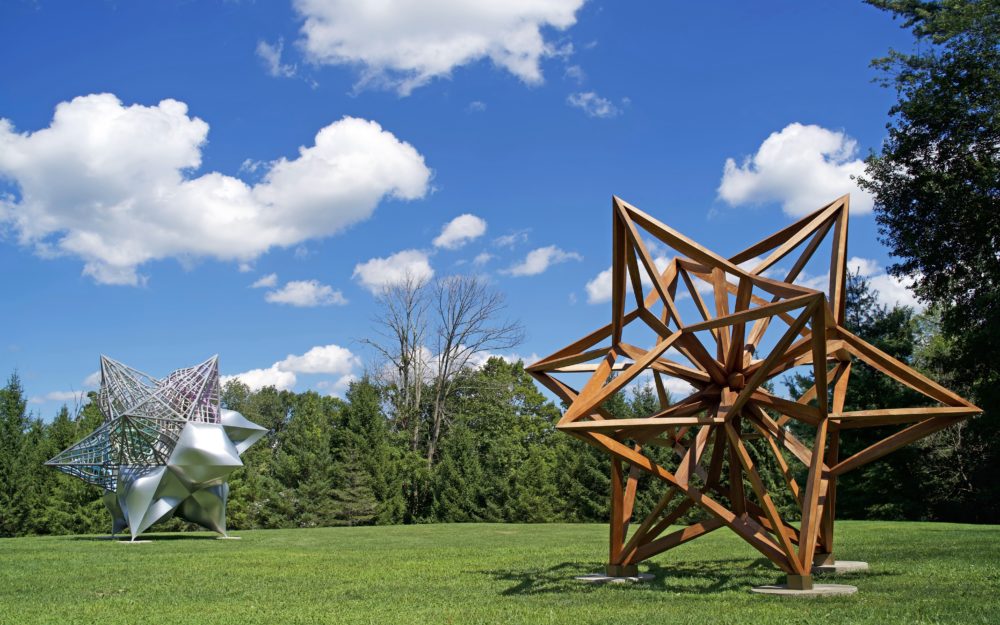 Frank Stella Has Always Been a Star, Architectural Digest

A new exhibition calls to mind an interview with Frank Stella from a 1983 issue of Architectural Digest. 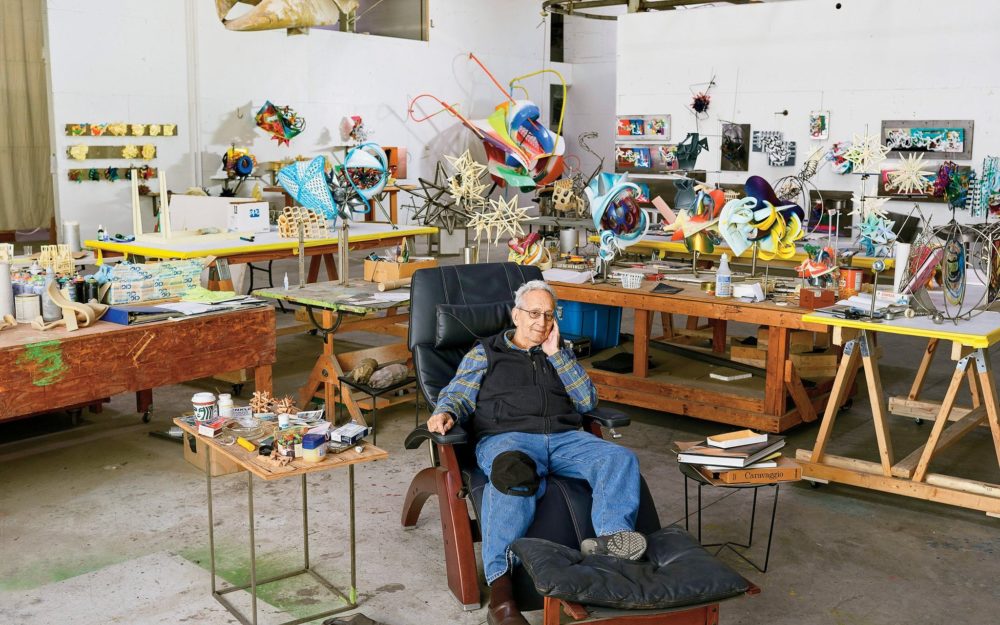 The artist’s Minimalist abstractions helped change the direction of his painting. 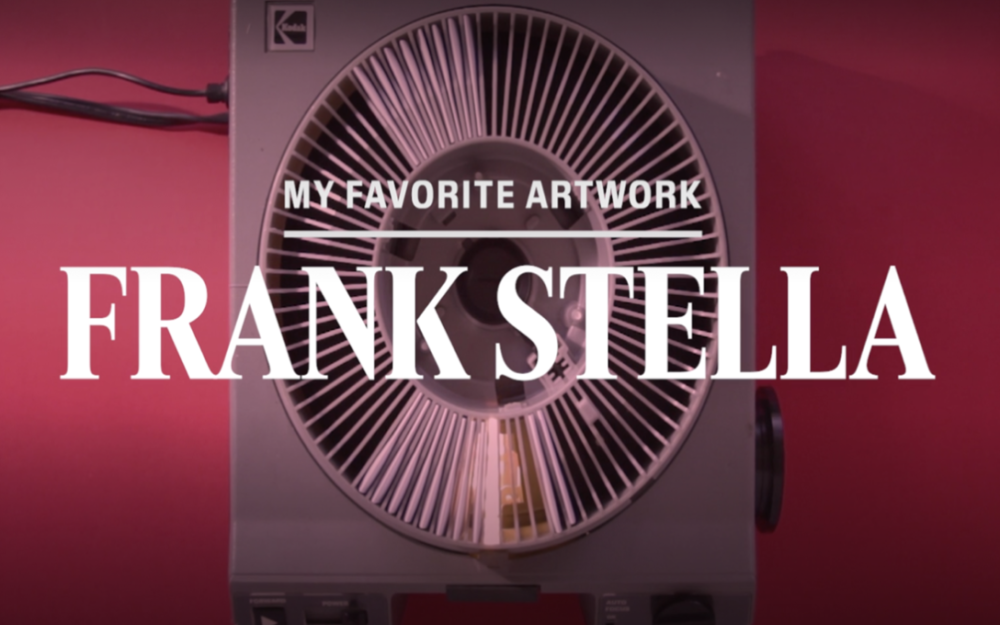 The artist cites a painterly 19th-century landscape and a geometric 20th-century mural as influences on his own work. 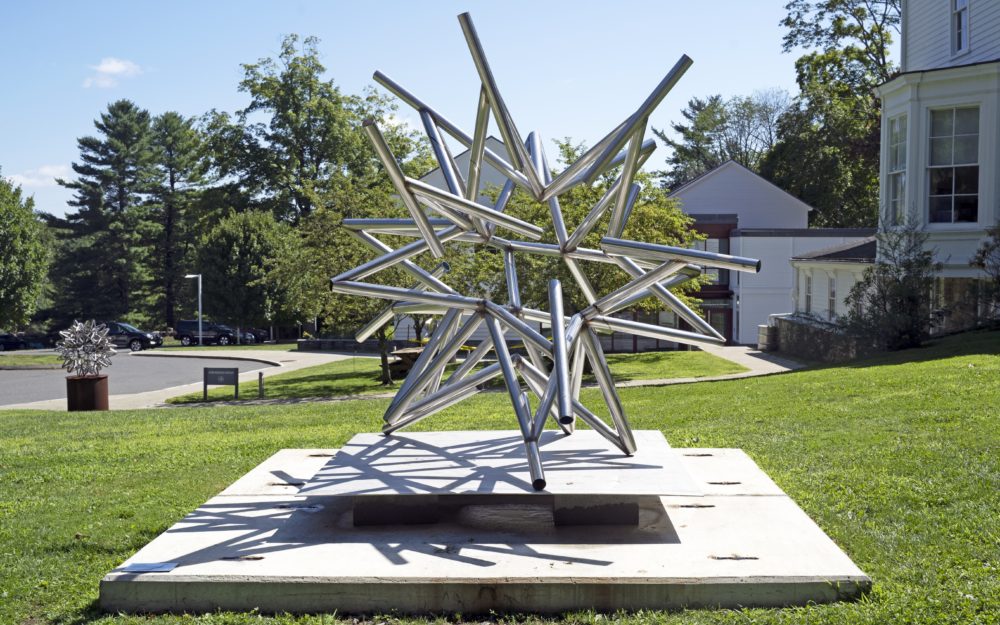 The show highlights Stella’s work with star figures, a form he’s often explored during a career of more than six decades.