The task of the kinetic artist is not simply to make art move, but to move all those who see it. The premise is motion for effect; the desired result is poetry in motion.

This is what 91-year-old American artist and architect Tim Prentice has devoted his career to. He is currently staging a major two-part exhibition at The Aldrich Contemporary Art Museum, Connecticut, his first solo show since 1999. How does he feel about it? ‘I’m pleased, but I would be more pleased if they’d given me a show when I wasn’t so decrepit,’ he quips.

For the last half-century, Prentice has lived in nearby Cornwall, northwest Connecticut. It’s a town of 1,500 people, half of which, according to the artist, are ‘weekenders, summer part-timers, or recovering New Yorkers’.

‘I’m pretty isolated, which is an advantage in the present situation. I commute across the lawn, so I’ve been working at home for the last 45 years,’ he explains over the phone from his studio, a former farm founded in 1790 by an ‘ice man’, who sold his frozen wares to neighbouring farmers. His workshop is in the former ‘ice house’ and he uses an adjacent hay barn for exhibiting works, but the artist’s main gallery is outdoors. ‘The place is dripping with all kinds of kinetic sculptures, hanging from the trees and in the meadows.’

In this part of the world, kinetic art is well established. The title of Prentice’s Aldrich show is ‘After the Mobile’, a direct nod to Alexander Calder, a name virtually synonymous with ‘mobile’. Calder was a former Connecticut resident who, in the 1930s, adopted the term after Marcel Duchamp urged him to put a name to his strange, moving, wind-driven constructions. ‘Kinetic sculpture is a fancier term for mobiles,’ says Prentice. ‘Kinetic sculpture is the one I prefer to use, because mobile is so linked to Calder; it’s like he owns it utterly.’

‘After the Mobile’ will feature 20 indoor works, five outdoor works, and a video portrait of the artist, Studio Visit (2006), directed by Corey Shaff. The indoor exhibition will run until 4 October 2021, with outdoor works on view from 19 September 2021 to 24 April 2022.

Prentice first saw Calder’s work as a teenager and was transfixed. ‘I thought it was defying gravity, it never left my head, it was one of those great moments. I didn’t realise until some years later that it changed my life,’ he says. ‘There are a lot of people who are so influenced by Calder that you can hardly see the difference. That’s the challenge of any artist I guess, to be inspired by [someone], then spend the rest of your life trying to get out from under their shadow.’

Prentice met Calder on a few occasions, but it was George Rickey – whom he describes as the ‘next in line in the papal succession of kinetic art’ – that the artist got to know. ‘He [Rickey] was interesting to me because he taught all his life and was very articulate about his work. He was analysing and teaching what he was doing. Rickey was an intellectual, Calder was an entertainer.’

Most importantly for Prentice, Rickey demonstrated that Calder had not explored every avenue of kinetic art; there was still turf to be claimed. ‘I thought, “Oh goodie, I’ll see if I can add to the vocabulary.”’ Prentice did so with complexity, and on a foundation of systems theory; physics with charm. Whereas preceding kinetic art had focused on how different forms moved with each other, Prentice asked, ‘What if those forms themselves changed?’ This resulted in works that shifted but always returned to their original form.

Though Prentice has been working in sculpture for half a century, architecture was his first language. ‘My father was an architect so that was my model, I didn’t have any other model, so I went into it automatically. I was brought up in the modern movement, and [my father] was the last generation of the eclectics, so we weren’t in the same line of work at all – our points of view were so different. When people said, “Oh it’s so nice you’re going into your father’s line of work,” it always made me cringe a little.’

Music has also played a lifelong role in Prentice’s work, one which has taken many forms. He’s made a hobby of creating percussive instruments, went on a global state-funded folk-singing tour with his wife to introduce American folk music to the world (and bring the world’s folk music home), and frequently works to a soundtrack of his favourites, Bach and Bobby McFerrin. ‘Sculpture deals with gravity and music deals with time, but there are parallels.’

Another influential figure was Josef Albers, under whom the artist studied at Yale. Albers ran ‘the interaction of colour’, a course Prentice took as an undergraduate, only to return seven years later and take exactly the same course again. ‘His whole thing was to limit options. The modernists said decoration was a sin – that’s the generation I was trained in.’ At first glance, Prentice’s work appears almost entirely devoid of colour, even in a work titled Homage to Albers, but its application is less literal. ‘I’m looking in the reflections,’ he says. ‘We use a lot of aluminium and stainless steel – you get reflections from whatever space you’re in. If somebody walks by with a red shirt, the piece turns red. I haven’t abandoned colour, it’s just not the prime subject.’

In 1999, things came full circle when Prentice – with his architectural partner Lo-Yi Chan – was commissioned to design the Albers Foundation headquarters in Bethany, Connecticut. ‘It was a great honour. I was by far the least known of the people they considered, but I was the only person who studied with Albers, so I guess I had an advantage.’

But for Prentice, being an architect was like being an orchestral conductor unable to play any of the instruments. In 1970, he decided he wanted to play the instruments, turning to sculpture as a solution. In architecture, ‘you work on the design and the drawings, wait to observe the construction, and it can take a year to find out whether you’ve made the right decisions. Like when you had to take a photograph to the drug store to be developed and get it a week later – it’s maddening,’ he says. ‘With sculpture, you learn from what you’re doing instantly. Now I’m working in spaces that other people have designed, and I put the cherry on top.’

Over the next decades, Prentice developed a knack for sensing the mood and movement of a room. ‘If you’re doing a commission for a library or a church, you want the mood to be tranquil, relaxing, and serene, but if you do a piece for an airport, people are wired, and concerned: “Are they late? Are they getting the right plane?” And they might just catch a glimpse of it as they rush away. It’s not just the character of the architecture, but what’s going on.’ His architectural background sees him well placed to understand nuances of space. ‘I like to think I have chops on both sides,’ he says.

Prentice’s seemingly complex yet rational systems of bent, articulated wire and ultra-light metal planes are hyper-sensitive to moving air. Through rippling and fluid patterns, works such as Light Carpet (2010) and Double Banner (2020) offer an illusion of fragility but are deceptively robust. They relent to the wind’s force but always recover. It’s this approach that sets Prentice apart in the story of kinetic art, and proves there is indeed life after Calder’s mobile.

But what it all circles back to is play: playing the instruments, play in the legacy of kinetic art (indeed Calder once made a living designing toys) and the challenge of embracing play. ‘It’s the hardest thing,’ reflects Prentice. ‘If somebody said to me, “You’ve got all day, you don’t have to do anything, you can just play,” I would say, “OK, well who’s it for, where’s it going, how big is it going to be, how much is it going to cost?” I have to turn it into a job. That’s been my dilemma.’

So amid all the meticulous pre-planning and control, who, ultimately, gets to play? ‘That’s a critical question’, says Prentice. ‘Chance is left up to the wind. We just make toys for the wind to play with, and hope that the wind is curious enough.’ 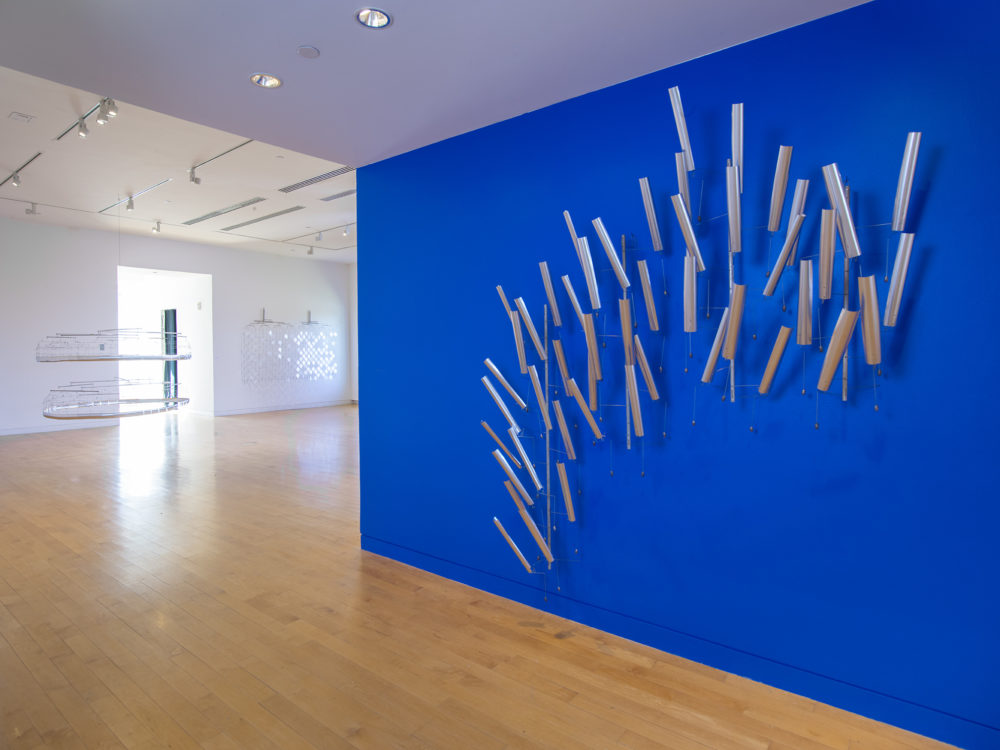 Tim Prentice: After the Mobile 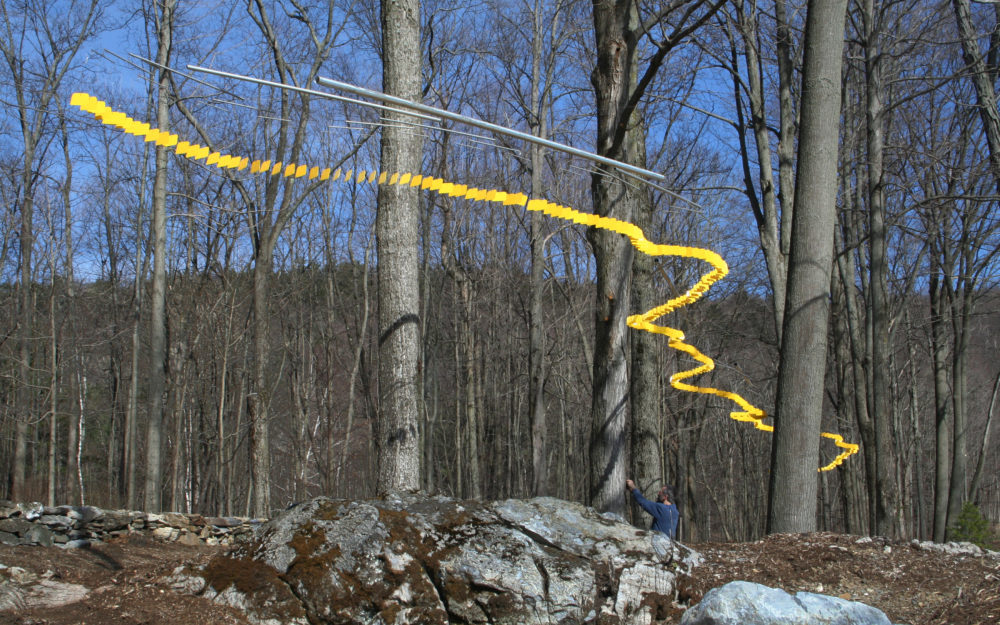 Tim Prentice (b. 1930) is known for his innovative work in the field of motion in sculpture. Prentice has been a resident of Connecticut since 1975, and After the Mobile marks his first solo museum exhibition since 1999. 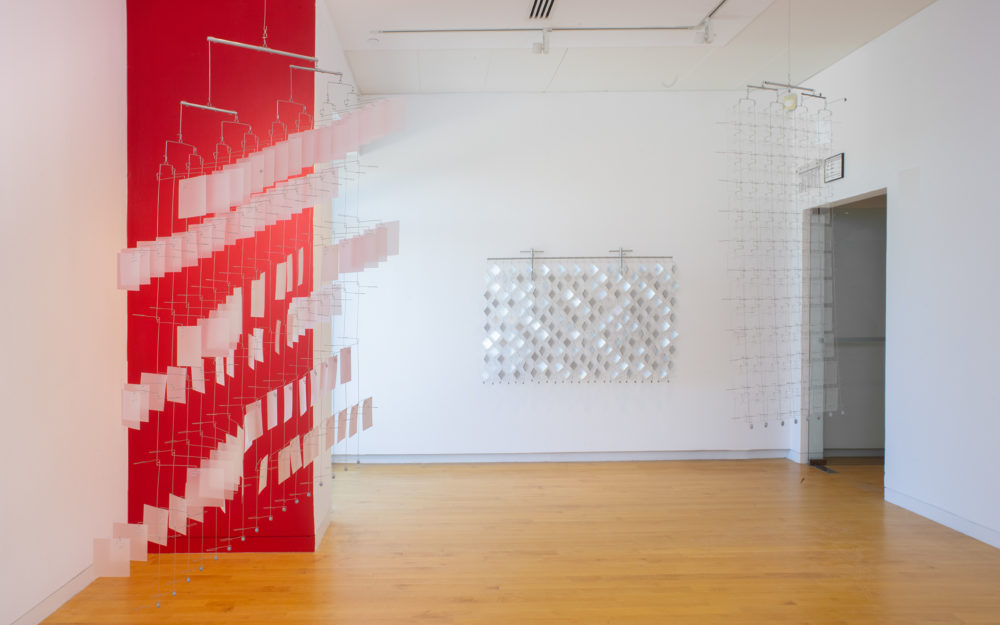 The Critics Notebook, The New Criterion