Following an invitation from The Aldrich’s then-director, Dororthy Mayhall, renowned writer and curator Lucy R. Lippard organized Twenty Six Contemporary Women Artists, which opened at the Museum in April of 1971. The exhibition presented the work of twenty-six emerging women artists, all of whom never had a solo show in New York City before March 1 of that year. In preparation of 26, Lippard visited 100 artist studios in just six weeks, resulting in a survey of women artists working in New York in the early 1970s.

I took on this show because I knew there were many women artists whose work was as good or better than that currently being shown, but who, because of the prevailingly discriminatory policies of most galleries and museums, can rarely get anyone to visit their studios or take them as, seriously as their male counterparts. The show itself, of course, is about art. The restriction to women's art has its obviously polemic source, but as a framework within which to exhibit

good art it is no more restrictive than, say, exhibitions of German, Cubist, black and white, soft, young, or new art. I chose what I chose because of my personal tastes, accumulated over 6 years of writing about and 12 years of looking at contemporary art. These tastes are for the most part based on a broad acceptance of the double mainstream of modern art, the so-called avant-garde, which for better or worse has been largely white and male-dominated.

Within the next few years, I expect a body of art history and criticism will emerge that is more suited to women's sensibilities. In the meantime, I have no clear picture of what, if anything, constitutes "women's art," although I am convinced that there is a latent difference in sensibility; and vive la difference. After selecting this show from hundreds of possibilities, I was aware of a strong personal identification with work by women, but as yet I hesitate to draw any conclusions from it; I sensed a similar undercurrent in 1966 and 1968 when organizing two shows called "Eccentric Abstraction" and "Soft Sculpture," which included more women than was my habit or anyone else's at that time. I have heard suggestions that the common factor is a vague "earthiness,'' "organic images," "curved lines," and, most convincingly, a centralized focus (Judy Chicago's idea). But until a great many women artists surface who have been taught by women, turned on by women’s art as much as all artists have been turned on by the widely exposed art of men, until women artists have become aware and unashamed of the particularities of their own sensibilities—until then, I don't think anything definitive can be said on the subject.

It is, however, fully possible, and necessary, to reject the inane cliches of "feminine" art based on superficial characteristics such as delicacy, prettiness, paleness, sweetness, and lack of structure. Miriam Brummer has pointed out that from Renoir to Lyrical Abstraction, these qualities are consistently found in art made by men. As the search for more profound biological, psychological, and political sources advances, far more interesting common factors will be exposed. Organizations like the pioneering WAR (Women Artists in Revolution), the more recent Women Artists, Ad Hoc Women's Committee, and the west coast groups; art historians like Linda Nochlin Pommer and critics like Cindy Nemser, are among those who have begun to raise and propose answers to these questions in the art world. My own answer, for the time being, is this show, the work of all the other women who could have been included in it, the work of those few who have already "made it," and of those who have the guts to keep up the struggle and make it easier for their sisters.

I also took on this show as a form of personal retribution to women artists I'd slighted, unintentionally, in the past. I have recently become aware of my own previous reluctance to take women's work as seriously as men's, the result of a common conditioning from which we all suffer. (When I was an art historian, the problem rarely arose; most women artists have already been "evaluated" out of the picture by male-oriented historians.) The woman artist has

tended to be seen either as another artist's wife, or girl, or as a dilettante. Now I know that, contrary to popular opinion, women are not any more "part-time artists" than anyone else.

Very few artists of any sex in America do not work at something other than their art to earn a living, though it's true that women often have three jobs instead of two: their art, work for pay, and the traditional unpaid "work that's never done." The infamous Queens housewife who tries to crack the gallery circuit is working against odds no Queens housepainter (Frank Stella was one) has had to contend with. I admire tremendously the courage of those who stick to it. Women's art often has an obsessive element to it; it has to, given the obstacles laid in its path. It is far easier to be successful as a woman critic, curator, or historian than as a woman artist, since these are secondary, or housekeeping activities, considered more natural for women than the primary activity of making art.

For these and endless other reasons, choosing this show has been an exhilarating and a depressing experience; exhilarating because I saw so much personal and esthetic strength, so much more good work than even I had suspected; depressing because of the spectacle of so many women torn between so-called femininity and their work (a choice that will, hopefully, soon be outdated), and because I couldn't see enough, because I had to make judgements and choices and narrow down several hundred artists to 26. In order to facilitate the task of going to some 100 studios in the New York area in 6 weeks, I made one wholly arbitrary limitation. I hope it was at least no more unfair than any other. No one in this exhibition has had a one-woman show in New York prior to March 1, when I made my final decisions. For the injustices incorporated in this limitation, I apologize, specifically to the three women whom I asked to participate and had to

withdraw because they had shown: Agnes Denes, Pat Johanson, and Anne Wilson; and generally to all those whose work I liked very much and didn't include for illogical reasons of space, compatibility, in short, my manner of putting together a show as a whole. I'd like to thank Larry Aldrich for asking me to do the exhibition, the museum's director, Dorothy Mayhall, for her sympathetic, energetic help, Susana Torre for designing the catalogue, the artists for specifying the layout of their own pages in it, and above all for their enthusiastic support of the show and the reasons behind it. 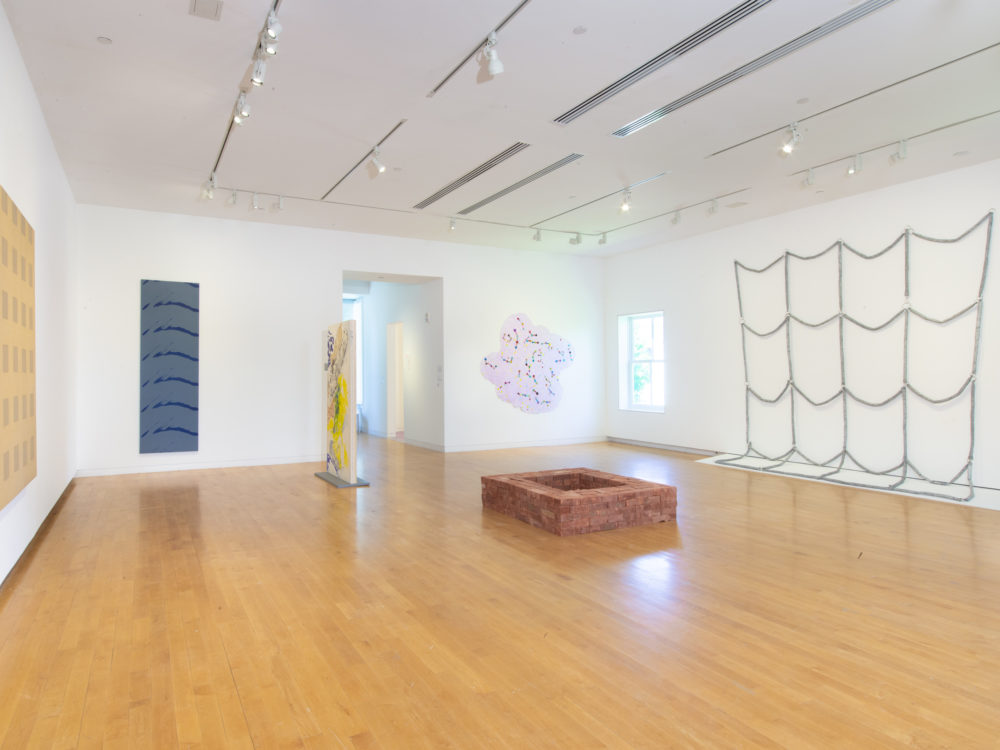