52 Artists: A Feminist Milestone celebrates the fifty-first anniversary of the historic exhibition Twenty Six Contemporary Women Artists, curated by Lucy R. Lippard and presented at The Aldrich Contemporary Art Museum in 1971. 52 Artists will showcase work by the artists included in the original 1971 exhibition, alongside a new roster of twenty-six female identifying or nonbinary emerging artists, tracking the evolution of feminist art practices over the past five decades. 52 Artists will encompass the entirety of the Museum (approx. 8,000 sq. ft)—the first exhibition to do so in The Aldrich’s new building which was inaugurated in 2004.

The twenty-six emerging artists were born in or after 1980, live and work in New York City, and will have not had a major solo museum exhibition in the United States as of March 1, 2022, aligning both with The Aldrich’s mission of representing the work of emerging artists and with Lippard’s original mandate for the 1971 exhibition. "This group of 26 emerging artists reflect the revolutionary advancement of feminist art practices over half a century and exhibit a diversity of experiences and a multiplicity of sensibilities united by a twenty-first century feminist expression that is inclusive, expansive, elastic, and free," said The Aldrich’s Senior Curator Amy Smith-Stewart, who curated the contemporary selection.

On view at The Aldrich from April 18 to June 13, 1971, Twenty Six Contemporary Women Artists was organized by writer, art critic, activist, and curator Lucy R. Lippard. She viewed curating this landmark exhibition as an activist gesture. In its catalogue, she states: “I took on this show because I knew there were many women artists whose work was as good or better than that currently being shown, but who, because of the prevailingly discriminatory policies of most galleries and museums, can rarely get anyone to visit their studios or take them as seriously as their male counterparts.” With this exhibition, Lippard arguably founded feminist curatorial practice in this country.

52 Artists will survey this landmark exhibition, including works of art from the original exhibition and recreations of some of the more ephemeral pieces, and, if neither are available, related works from the same period. The exhibition will also include recent works by many of the original artists showing how their practices have evolved over the past fifty years. 52 Artists will also debut a commensurate group of twenty-six emerging artists living and working in New York City. By showing the original group alongside emerging artists of today, the exhibition will testify both to the historic impact of Lippard’s milestone exhibition and to the influence of her work, and the work of the original twenty-six artists she presented at The Aldrich, on a new generation of feminist artists.

Lippard’s original 1971 exhibition at The Aldrich was one of the first institutional responses to the issue of women artists’ invisibility in museums and galleries. More specifically, the show offered a rejoinder to the protests by the Ad Hoc Women Artists Committee (founded by Poppy Johnson, Brenda Miller, Faith Ringgold, and Lucy Lippard) over the absence of women in the Whitney Museum of American Art’s 1970 Sculpture Annual. Twenty Six Contemporary Women Artists opened the floodgates to a host of other feminist exhibitions throughout the 1970s, signaling Lippard’s emergence as a visionary feminist curator and critic and marking the debut of many groundbreaking artists. 52 Artists not only celebrates this radical exhibition but underscores its ongoing influence on future generations of artists.

The exhibition is organized by The Aldrich’s Senior Curator Amy Smith-Stewart and independent curator Alexandra Schwartz, with The Aldrich’s Curatorial Assistant Caitlin Monachino.

A 200-page softcover book will accompany the exhibition. This significant catalogue will include new essays by Lippard, Smith-Stewart, and Schwartz, as well as rare historical documentation of the original exhibition, images, installation views, and checklists from both the 1971 and 2022 shows.

“'Our selection reflects the revolutionary advancement of feminist art practices over a half century,' said Aldrich curator Amy Smith-Stewart, who...[selected the emerging twenty-six artists]...picked artists who 'exhibit a diversity of experiences and a multiplicity of sensibilities united by a 21st-century feminist expression that is inclusive, expansive, elastic and free,' she said.”
—Artnet News
“Critic and activist Lucy Lippard's landmark 1971 exhibition of twenty-six women artists at The Aldrich Contemporary Art Museum was among the first institutional responses to the underrepresentation of women in art history. To celebrate its fiftieth anniversary, the museum has reassembled the show's original cast - including Howardena Pindell, Carol Kinne, and Adrian Piper - and positioned them in dialogue with emerging female-identifying or nonbinary artists.”
—Art in America

Major support for 52 Artists: A Feminist Milestone is provided by The Andy Warhol Foundation for the Visual Arts.

Additional support is provided by Bernard Lumpkin and Carmine Boccuzzi.

The catalogue for 52 Artists: A Feminist Milestone is generously supported by the Eric Diefenbach and James-Keith Brown Publications Fund and the Girlfriend Fund. 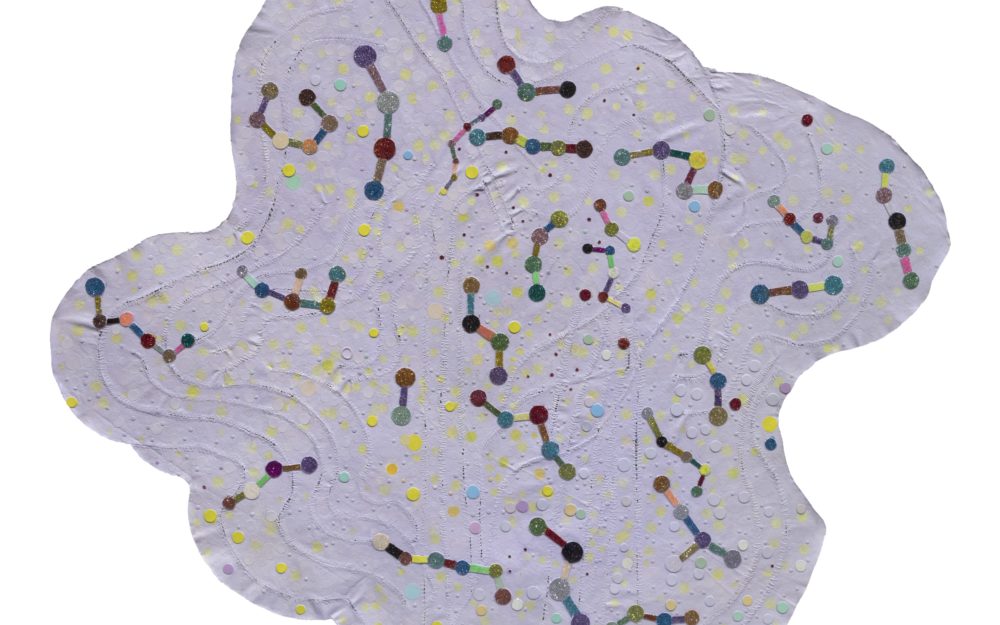 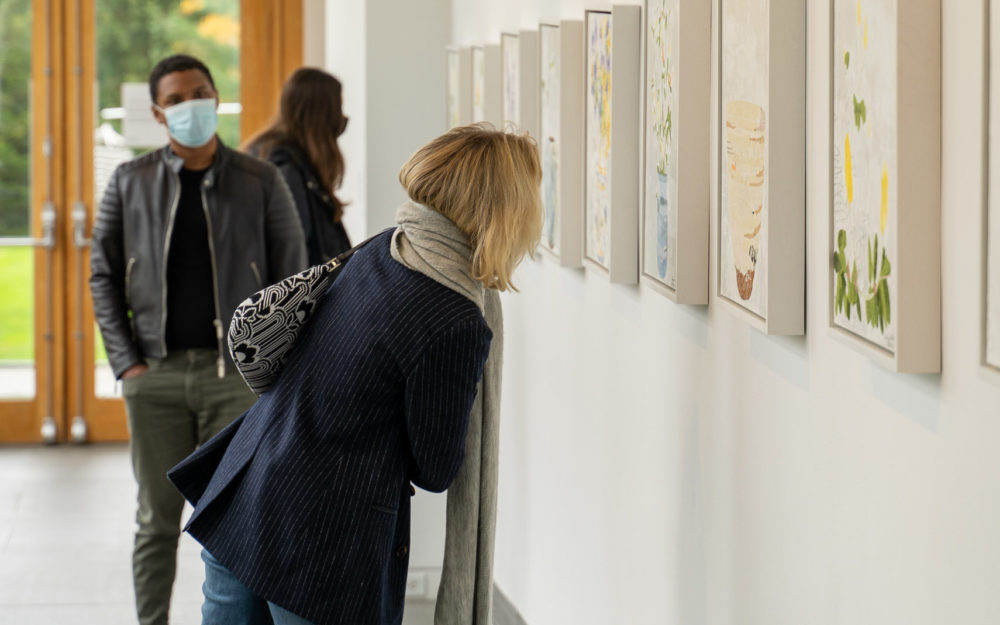 Drinks with the Director

Join The Aldrich’s Executive Director, Cybele Maylone, for a tour of the Museum’s current exhibitions followed by drinks on the terrace. 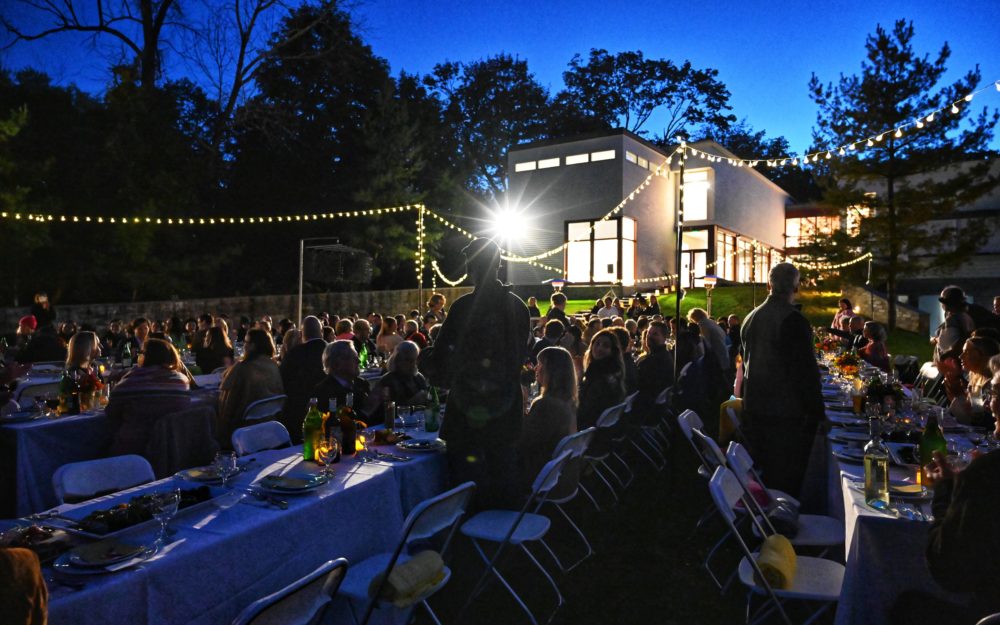 Aldrich Artists at the Table

Save the date for the return of Aldrich Artists at the Table, the Museum's annual farm-to-museum dinner in our Sculpture Garden. 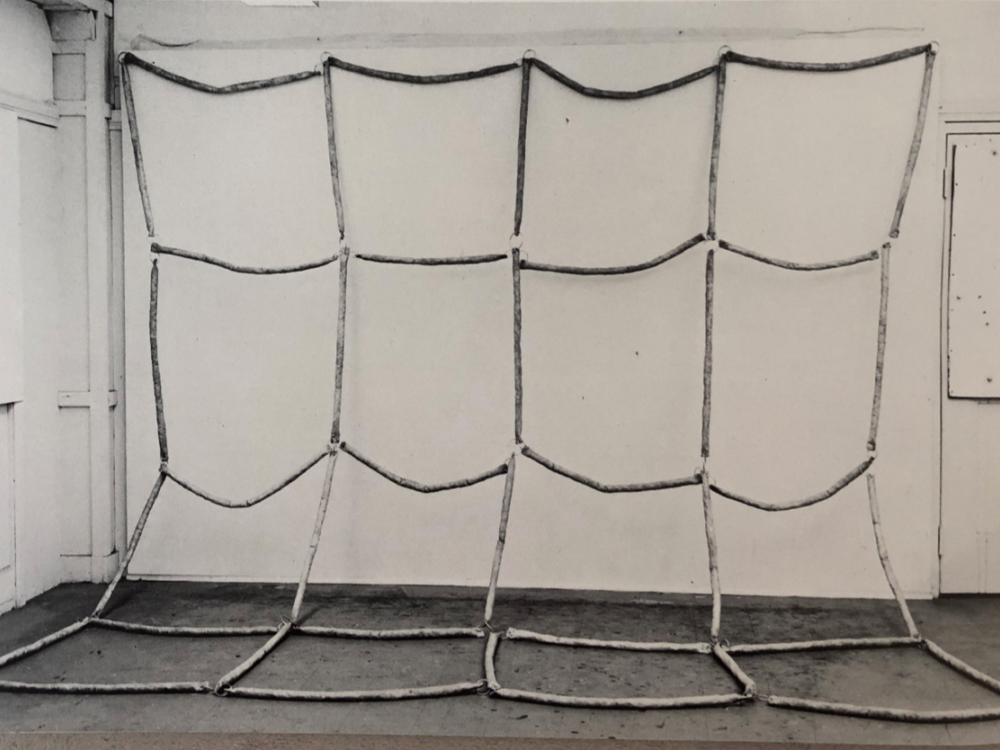