At the Aldrich Museum, the Coyote Takes the Lead, The New York Times

Duane Slick deploys his canine friend in a thrilling show. For the 60-year-old artist and professor, this first museum solo is long overdue.

Slick’s artworks are now on view at the Aldrich Contemporary Art Museum in Ridgefield, Conn., where the artist spoke about his life and work. Titled “The Coyote Makes the Sunset Better,” it is his first solo show in a museum and features 90 artworks: abstract paintings, text art, prints, photography, found objects and video.

His output wasn’t always so varied. The artist and curator Jaune Quick-to-See Smith recalls, “When I met Duane, he was a fabulous landscape painter in oils.”

But that changed about three decades ago. “I kind of think everything starts in 1990,” Slick said of the new direction his work took. At that time, preparations were underway for the 500th anniversary of Columbus’s arrival in America. Smith invited Slick to contribute work to a show she was curating “from a Native point of view.” But she wanted explicitly political work.

“I was hoping to open some doors and windows, let some fresh air in, on the fallacies this country was promoting,” she said.

At first, Slick found Smith’s request for political work challenging. But then, while out at Provincetown Fine Arts Work Center in Massachusetts, he came across some local news: Coyotes, native to the American West, had made their way out to the tip of Cape Cod. The news seemed serendipitous. He had already been thinking about the Coyote, a recurrent figure in many Indigenous American myths, while reading traditional tales in books like Barry Lopez’s “Giving Birth to Thunder, Sleeping With His Daughter.”

“I decided I couldn’t make the overtly political works,” Slick said, “But if I trusted Coyote, he could do it for me.”

He ultimately delivered a work that was “highly political and praiseworthy,” Smith said in an email, “a knockout mixed-media painting that recited the names of his ancestors and noted Native Americans from early in the century.”

Slick’s abstract landscapes soon gave way to a wide-ranging practice, which often incorporated the coyote. He began performing what he calls “sand stories,” dribbling sand from his closed fist onto a black cloth while recounting tales that featured the animal as a central character. He even delivered a lecture at the College Art Association that took the form of a five-minute scripted conversation with a coyote. While Slick told stories, the coyote hectored him: “Duane, stick to the subject. Why are you here?”

Three decades later, Slick’s canine friend appears throughout his Aldrich show — and not just in the form of two coyote decoys positioned in the museum. The coyote’s wolflike mug appears repeatedly, in prints and paintings that start to echo Warhol’s famous multiples of celebrities. With the animal’s head tilted at various angles in layered hues, the brighter pieces in the series evoke the flashy alternating neon-light animations one might find on a nightclub sign. The show also includes a video based on 3-D scans of a coyote mask that Slick bought in Mexico; a series of text paintings; and a photograph of his personal book collection (with titles like “Custer Died for Your Sins”).

Interspersed among these portraits are more abstract horizontal-striped canvases that Slick produced during lockdown. When making these paintings, he says, he had the American flag in mind. (His father, a Korean War veteran, had died in 2008 followed by several other family members.) He says he was also thinking about the darkness of night, and the colors of feather fans, and the row upon row of storage shelves he saw while working on a project at the Haffenreffer Museum of Anthropology at Brown University, which was founded around a collection of 60,000 Native American objects.

The paintings are terrific. Seeing them provides a thrill that I imagine is similar to discovering a five-letter word that’s both the password to a dormant bitcoin wallet and the answer to today’s Wordle: The works have the ingenuity of one singular answer to several puzzles at once. For one, they suggest the textures of modern life, whether in the perfect curves of prefab furniture or the glitching screens and grids of early video games. But they also seem to get at the experience of bereavement amid nature: the experience, maybe, of pausing to look at a night sky and letting an unfamiliar new solitude sink in.

On top of all that, they engage with various traditions of geometric pattern-making honed long before European and American modernists became famous for the practice. But they also succeed when read through the lens of Minimalism and hard-edge painting, whose legacies have become part of many top-tier East Coast painting M.F.A. programs today.

Slick himself has taught at the Rhode Island School of Design for nearly 27 years, in both the painting and printmaking departments. (Those two worlds seemingly come together in his Coyote canvases, whose painted, overlapping hues echo the layered approaches of printmaking.) “Many people, they work on stuff that’s sort of one-off,” the painter Dennis Congdon, who was chairman of the RISD committee that hired Slick, said. But the artist “takes the theme and he troubles it, and he revivifies it and problematizes it.”

Of Slick’s current exhibition, Congdon said: “Every painting in there is so good.”

With work this good, it might be hard to believe that Slick is only now receiving his first solo museum show at age 60. But as Smith explained, “This happens a lot in our Native communities.” She noted that if one were to survey art museums across the U.S., each might “have a half-dozen contemporary Native artists or none.”

Slick has had solo shows at other nonprofit institutions, like the UNI Gallery of Art at the University of Northern Iowa, his undergraduate alma mater. Darrell Taylor, the gallery’s director, has long been struck by Slick’s work. He said that when the gallery opened a year of shows by alumni in 2010, Slick was “one of the first people I thought of.” 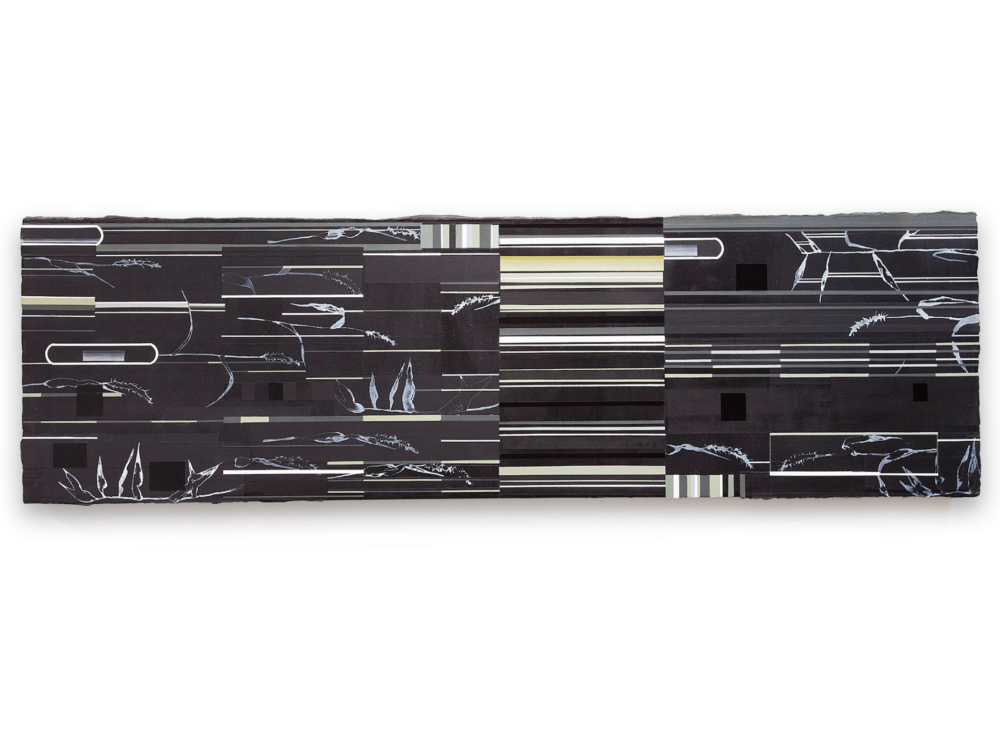 Top image: Duane Slick in his studio in Providence, R.I. Behind him, on the wall, one of his pieces whose working title is “An Actuarial Space II, in-progress - 2022.”Credit...Scott Lapham